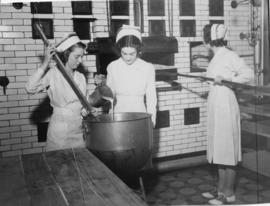 In 1973, the first women's studies course was offered at Mount Saint Vincent University as an interdisciplinary course at the 300 level, taught by Dr. Susan Clark, Dr. David Monaghan and Dr. Rosemary Sampson. Other courses with an emphasis on women were introduced over the next few years in other departments at the University, along with a 100 level course taught by Dr. Frances Early in 1982. A major in Women's Studies was approved in 1984 and the department of Women's Studies was formed. An Honours degree in Women's Studies was offered in 1987. A joint Women's Studies Master's program was launched in September 1996 with Saint Mary's University and Dalhousie University. Dr. Susan Clark is credited to the growth of the Women's Studies program. In 1978 she became the Dean of Human and Professional Development and established the Institute for the Study of Women in 1981. Clark brought the publication Atlantis: A Women's Studies Journal to the university, and is responsible for the creation of the WomenÂ's Studies Chair and funding for library resources. Other early faculty members were Deborah Poff, who was a coordinator for the program and an Assistant Director for the Institute of the Study of Women in 1984 until 1991; Dr. Patricia Baker and Dr. Rhoda Zuk who were hired as cross appointers in 1989 and 1990 and Dr. Meredith Ralston the first full-time faculty member in the Women's Studies program in 1993. Some of the department's chairs over the years were Dr. Josette Deleas, Dr. Pat Baker and Dr. Meredith Ralston.

Fonds consists of material such as brochures, meeting minutes and agendas, annual reports, and inter-office correspondence regarding the Women's Studies department.